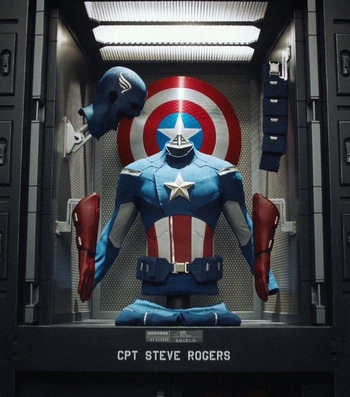 ...I thought his last name was "America"...
"The Avengers roster bloats even further with Vision, Scarlet Witch and Quicksilver, who, for some reason, are never called 'Vision', 'Scarlet Witch' or 'Quicksilver'."
— Honest Trailers for Avengers: Age of Ultronnote Technically, Thor had actually referred to Vision as "the Vision" towards the near end of the movie, but that's not the point here.
Advertisement:

Simple: "Grass Man" is a name that the general audience might have a hard time taking seriously, and the producers knew it. Sure, that's what he's been called for decades in the comics, but there are very poignant reasons why people still have a hard time disassociating comic books with Campiness. Decades ago, "Grass Man" might have been perfectly feasible for a character that can control plants, but nowadays, there's almost no way to use that name around the uninitiated without invoking a snort and a snicker. Hell, even a potentially "cool" name like "The Sabre" or "Dark Wolf" might seem a little too superheroic, especially if you're going to be calling someone by that name the whole movie. And on the villain side, it probably wouldn't make sense for someone to go through a traumatic experience and immediately start calling themselves "Dr. Destructo".

However, because the producers don't want to completely alienate the comic fans which supported the character to begin with, they add a little Shout-Out just to appease them. "Grass Man" was definitely in the movie, even if that wasn't officially his name. They might even call the movie "Grass Man" without ever calling the character that. However, sometimes this trope gets taken even further and the superhero name is never used at all.