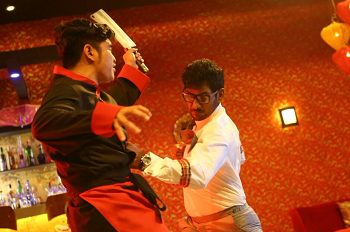 "The warrior said nothing, for his mouth was full. Then he swallowed. And then he spoke: 'Enough talk. Let's fight!'"
— Kung Fu Panda
Advertisement:

A fight scene taking place in a Chinese restaurant. Typically this involves everybody Kung Fu fighting, with disrupted dinners and broken china to the nth degree. Paying for the Action Scene, as always, is optional.

Not related to Cooking Duel. Compare Chef of Iron and Frying Pan of Doom when the woks, etc., are being used as weapons. See also: Diner Brawl, Kitchen Chase. Being part of a Chop Sockey setting is, of course, not unheard of.

Not to be confused with Wakfu.