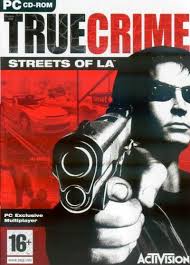 A wide-open sandbox game developed by Luxoflux and published by Activision where you play as Nick Kang, a Chinese-American cop in L.A., in the vein of irreverent action-comedies such as Beverly Hills Cop. It is noted for several things: Mixing gunplay with martial arts, being really funny, and allowing the plot to progress even if you fail every single mission (though failure does prompt many different branchings and will affect how good an ending you reach).
Advertisement:

Also notable for the fact that it pulls yet another sudden Genre Shift during the latter part of the Good ending, where Nick descends underneath the city and starts fighting zombies and dragons, in a homage to Big Trouble in Little China.

It was followed by a sequel, True Crime: New York City, which was not nearly as well-received by critics or fans. A third game, True Crime: Hong Kong, was in production before being cancelled in 2011; though it did eventually see release under publisher Square Enix, it was no longer a True Crime game as Square Enix did not own the license, and so it was released under the title Sleeping Dogs in August 2012.