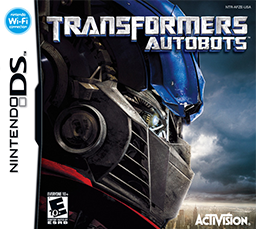 Create-A-Bot: You Decepticons don't know when to quit! Time to teach you that the bad guys always lose!
Construct-A-Con: You Autobots are no better than we Decepticons. We might be on opposite sides, but we're both playing the same game.
Advertisement:

To coincide with the 2007 film, Transformers: The Game (Console) was released in two halves for the Nintendo DS. One follows the plot of the movie, focusing on the Autobots' attempts to reclaim the AllSpark. The other game focuses on the Decepticons, and a power struggle that evolves during their quest for the AllSpark. Woven in amongst both games is a study on how both sides are not all the different from each other. The Decepticons are shown to have a code of honor, and have some sympathetic members in their ranks, while the Autobots make some rather gray moral choices. Both games also star a player-created character, who's a rookie to the cause, be he Autobot or Decepticon, as he learns what it means to be a member of either faction.

The games feature a lengthy campaign and wide open worlds for you to explore. Notably, the player-created character is able to take the alternate form of nearly any vehicle the player wishes at any time.

Considerably Darker and Edgier than the console game, and with a greater focus on plot and characterization, the game is widely considered much better than its console counterpart.

Both versions provide examples of:

The Autobot portion contains examples of:

The Decepticons game features examples of: