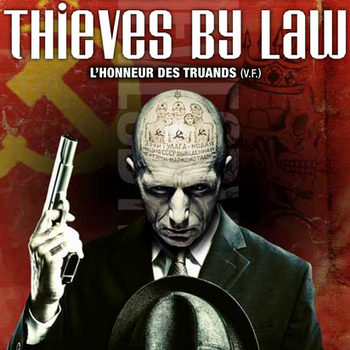 Stay away from people like me...
"A fellow prisoner once told me he will kill my family, cut out my tongue, eyes, burn off my skin with acid and shut down my business. Well, he did kill my family. But I still have my eyes, tongue, skin. Most important: I'm still in business. Because I understood the man. So, I was ready. See, we Russians don't make threats—only promises."
— Vadim Solonick, Boomtown
Advertisement:

The Mafia — but Russian!

OK, it's a little more complicated than that.

Russian mobsters engage in all the same activities as Italian mobsters, but are typically depicted as much more openly ruthless, sadistic, brutal, and vicious — in other words, totally lacking the veneer of class and sophistication that many depictions of the Italian Mafia have built up around the organization. The thinking is that because they had to operate in the Soviet Union and The New Russia, they are by definition stronger than your average mobster.

They're known outside of Russia as the Organizatsiya ("The Organization") and within Russia as the Bratva ("The Brotherhood"). Members are called tolkachi ("pushers") or bratki ("bros"). But there are a lot of different terms for these guys, all with their own distinctions:

These are also distinct from the gopnik, or Russian Gang Banger,note A noted Canadian-American essayist/commentator of Russian Jewish descent by the name of Adam Gopnik

was simultaneously amused, horrified, and mystified to find this out who's basically just the garden-variety petty criminal youth from the Wrong Side of the Tracks. They're not in the Mafiya — they're just interested in petty crime and beating the crap out of rival gopniki. A relatively recent development is the "AUE" subculture, which consists mostly of underage gopniki who still aren't in the Mafiya but pretend they are and really want to join. Actual career criminals tend to see them as useful idiots, but there is evidence that the Mafiya has started to recruit from their ranks.

Organized crime has existed in Russia since Tsarist Russia and the Soviet Union, but it really exploded with Soviet collapse, when newly unemployed military men (and others with the right skill set for this sort of thing) found themselves suddenly unable to find work. They put their skills — and the newly abandoned military hardware — to use. The desperation of The New Russia also saw the Mafiya dispense with old traditions like the uniform taboo and the restrictive lifestyle of the vory v zakone as a matter of practicality — or perhaps greed, as even rule-abiding mobsters will never turn down a golden opportunity to make a lot of money. The Mafiya was totally pervasive in Russia in The '90s, to the point that Russia was sometimes called a "Mafia state" and most small and medium businessmen had to employ them for "protection".

Prison gang culture was historically very important to the Mafiya, in part because no professional criminal in the Soviet Union could hope to evade imprisonment for long. Prison gangs in The Gulag were branches and schools of the Mafiya called blatnye or otritsalovo, being in prison was a requirement for being a vor v zakone, and someone with no prison history at all was limited to gopnik or bratok status. Nowadays, with a less efficient police force, guard-sponsored gangs tend to have more influence. The Mafiya retains a system of symbolic tattoos that reflect not only a member's position in the hierarchy, but also their criminal and prison history — including symbols for "snitch" and "prison sex slave", naturally applied forcibly. Various offenses against the prison gang, including not contributing to the community slush fund (and "eating alone" as an American wiseguy might put it), could be punishable by demotion of the offender to the latter status, with the tattoos being applied as a Mark of Shame.

Something never seen in Western media — and even rarely in Russian media — is Fenya, an extensive and idiosyncratic Thieves' Cant that makes true Bratva dialogues indecipherable to civilians. Western productions don't use it because they have enough problems with regular Russian, and Russian productions would have to rely on Footnote Fever or assume that viewers have extensive knowledge of the criminal world — although it was so pervasive in Russia that odds are, an average Russian who was reasonably plugged in during The '90s (especially an ex-gopnik) will understand Fenya, if a bit erratically. Gopniki will try to speak Fenya as well, with varying degrees of success (and usually with a lot of needless swearing).

Aside from the Bratva proper, there are also ethnic Mafiya in Russia, mostly from the Caucasus, Ukraine, and Armenia. Some of them follow the usual Bratva mold, but are even more vicious and ruthless. Some (most famously the Chechen Mafiya, who are more similar to the Sicilians in their clannish organization and insular nature) do not, and are even worse.

See also Yakuza, Former Regime Personnel, The Mafia, The Triads and the Tongs, The Cartel, The Irish Mob and Red Scare. Often the Ruthless Foreign Gangsters in works set after 1991 since they are portrayed as stereotypically linked to human trafficking alongside other Eastern European criminals. Kosher Nostra also overlaps with the Mafiya since some members are of Jewish descent such as Evsei Agronnote "The Godfather" of the Russian Mafia in America and Semion Moglievichnote Considered by most of his contemporaries to be the "Bosses of all bosses" and "The most dangerous gangster in the world" by the FBI. See also Spell Our Name With A Po for their uniformed counterparts, otherwise not much different.