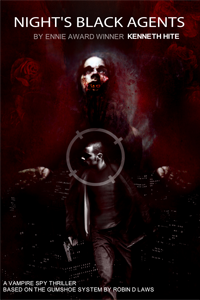 Night's Black Agents' default setting is a world of horror and shadows, with flashes of action. In this game, the player characters are secret agents who discover that vampires are real, in control of the world, and want to kill them for knowing they exist. They spend the remainder of the campaign using secret agent skills to destroy the vampire conspiracy. Central to the game is the idea that the characters are hyper-competent operatives, with the talents and resources to pull off their mission. High-tech gadgets, high-speed chases and intense combat scenes against villains both human or vampiric are the order of the day.

The Director (as the game calls the GM) customises the vampires and their conspiracy as they wish, with four base origins involved: supernatural (mystical but not necessarily evil origin), damned (explicitly demonic origin), mutant (human subspecies), or alien (inhuman species). From there, the game offers various powers, regenerative techniques, feeding methods and propagation methods, all with suggestions on which is best suited for which origin. The players have to discover these details within each unique campaign without any knowledge carried over from previous campaigns.

Directors can alter their modes of play to suit their individual visions. They are divided into Dust (gritty techno-thriller), Mirrors (paranoid bluffing, double-crosses and manipulation), Burn (pushing the characters to their mental limits) and Stakes (monster-hunting action-adventure). The core rulebook also offers three possible variants of the core setting suitable for straight spy stories, cosmic horror or psionic action.

Note: The Dracula Dossier, an improvisational campaign for Night's Black Agents, has its own page.