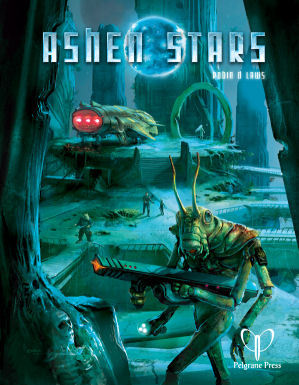 Ashen Stars is a Space Opera Tabletop RPG written by Robin Laws and published by Pelgrane Press in 2011, using the GUMSHOE investigative system. The players take the role of Lasers, freelance law enforcers solving problems for pay in the Bleed, a semi-autonomous frontier region of space where humans and half a dozen alien races co-exist. In this abandoned, war-ravaged fringe of inhabited planets, you're as close to a federal authority as they come. You will crew and operate a ship on a tight budget, hoping to pick up and complete assignments that will enhance your reputation and lead to better and more profitable assignments. It's a dirty job, but it pays.
Advertisement:

Not long ago things weren't so strained. The Combine is a space federation that had dedicated itself to peaceful exploration and discovery and the Bleed was its brave new frontier. Then, a disastrous war came with the Mohilar. Nobody remembers the Mohilar clearly, and reports are often contradictory. All that's for sure is they were bad news. The war crippled the Combine, and scarcity returned to the galactic economy with a vengeance. Now, as the Combine licks its wounds and could no longer exert control over fringe regions like the Bleed, the duties of law and order have fallen to you. In the meantime, the stars in the sky flicker and turn grey, and then revert to normal.

Each episode in an Ashen Stars game takes the crew to a new location, where they face a central problem they can resolve only by gathering information. Working out what this problem is gives you the premise of your episode. Ashen Stars invites you to think of it as the gritty reboot of a beloved space opera TV show from the past.