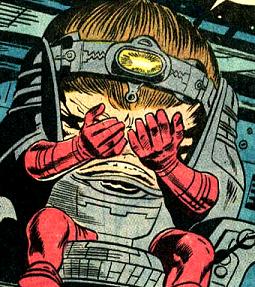 When all you are is a giant head, it's hard to Face Palm.
"Hey guys, whaddya call a big head with tiny arms and legs?"
— Jamie, Megas XLR
Advertisement:

Critters which, rather than having a head and a torso, are basically heads with limbs. Usually a cartoony simplification, though Spider Limbed heads sometimes appear in horror movies and the like.

If you're not sure whether a creature has a head-torso or just a particularly thick neck, check how much their mouth can open. If it goes all the way to the groin, you've got a winner.

Another good way to check is the position of their arms. Generally a Cephalothorax's arms will be at the same height as his eyes (approximately where his ears would be except Cephalothoraxes almost never have ears, or at least visible ones)

If they are video game characters with really stubby legs and arms (or no arms at all), they are Waddling Heads.

An ancient Greek legend described a race of Cephalothoraxes called "Blemmyae" living in north Africa, which makes this trope Older Than Feudalism. You probably shouldn't think too hard about where the digestive tract or heart/lungs are located.

A specific subtrope is Oculothorax, where the "head" is mostly just one big eyeball.

Compare My Brain Is Big.

Its important to note that arachnid and crustacean anatomy features a body part combining head and thorax orginally called the cephalothorax. While it does technically fit the trope, this is the natural state of such creatures, and as such should not be listed here.

While its does have a cage hanging from the bottom of its head, its arms are attached to the head as well.

While its does have a cage hanging from the bottom of its head, its arms are attached to the head as well.