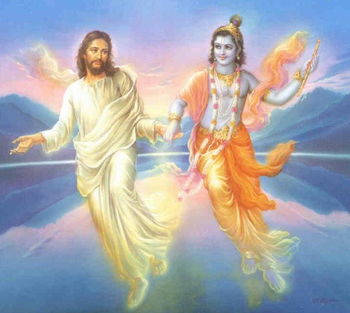 Gods just wanna have fun.
"You can see for yourselves. She is a god. A god who does not know she is a god."
— Majere (referring to Mina) from Dragonlance
Advertisement:

When some form of spiritual being, or deity, becomes encased in a mortal shell, usually causing them to have no or limited access to their powers… sometimes of their own design, sometimes forced upon them. Often referred to as an "avatar" after the Hindu religious term, but the word has gotten a little too commonplace to use as a trope name.

Of course, any example of this trope would be justified in calling themselves a god, without the usual implications of megalomania. That said, many go the other route and say "A God I Am Not" due to their new proximity to mortality and humanity. Or they may be going incognito and brush off recognition by saying "Stop Worshipping Me!"

May or may not be accompanied with the loss of their memories of godly life. This is often justified as them wanting to better understand the lives of mortals, thus living a mortal life without remembering their godhood. In that case they may simply appear as a fully grown adult with no memory or past, or they may actually be born into a human family and live a seemingly average life.

As such, their human forms may often have a very different personality, and on occasion even alignment, from their True Self. For example, a villain could very well live their human life as a pure and chaste paragon of heroism, but return to villainy upon awakening. And a benevolent deity could very easily be a thuggish Jerkass. Although overall, it is more common for benign gods to be good people, and malevolent deities to be bad people. Killing the human form of the god, if it's possible, probably won't actually kill the god. Usually, it actually restores them to their former divine power and memories.

Note that despite the title, this isn't restricted to humans, it can include aliens and the like as well. As the Greek philosopher Xenophanes said: "If horses had gods, they would look like horses!"

Compare A Form You Are Comfortable With, Angel Unaware, Deity of Human Origin, and Physical God. Compare and contrast Humanoid Abomination, which is very similar in practice, but are not so good about hiding their true nature. May overlap with Pals with Jesus and God Was My Co-Pilot. Contrast God Guise, when the character is not a god but is merely pretending to be one. Also see Amnesiac God and God Test.

Alternative Title(s): A Human Am I