For the Peter O'Donnell novel of the same name, see Modesty Blaise. 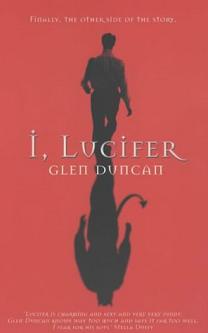 Finally, the other side of the story.
"I, Lucifer, Fallen Angel, Prince of Darkness, Bringer of Light, Ruler of Hell, Lord of the Flies, Father of Lies, Apostate Supreme, Tempter of Mankind, Old Serpent, Prince of This World, Seducer, Accuser, Tormentor, Blasphemer, and without doubt Best Fuck in the Seen and Unseen Universe (ask Eve, that minx)..."
— Lucifer
Advertisement:

I, Lucifer is a novel written by Glen Duncan in 2003. It's told entirely from the perspective of Lucifer himself while he's inhabiting the body of one Declan Gunn. God has unexpectedly decided to offer the fallen angel a chance at redemption. The deal is simple: inhabit a mortal body for a month, remain relatively sin-free, and then you're allowed entry to paradise once more.

Lucifer accepts this proposal, but with no intention of living a quiet mortal life. Instead, he views the month of mortal existance as a "holiday" from the running of his evil enterprise, intent to indulge every imaginable pleasure of the flesh. However, in an attempt to show the world what it's like to be him, old Luce finds himself slowly learning what it is to be mortal.

A book filled to the brim with clever subversions and dark humour. This quote from critic Stella Duffy sums the book up pretty well: "Lucifer is charming and sexy and very, very funny. Glen Duncan knows way too much and says it far too well... I fear for his soul."