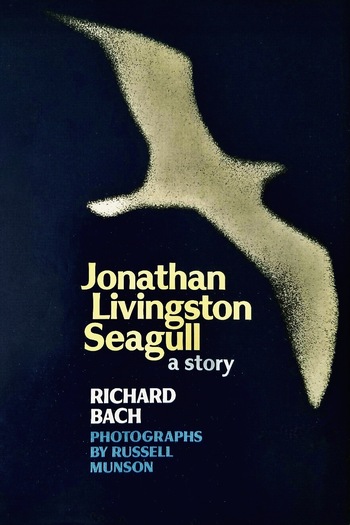 "Keep working on love."
Lost on a painted sky
Where the clouds are hung
For the poet's eye
You may find him
—Neil Diamond, "Be"
Advertisement:

Jonathan Livingston Seagull is a 1970 novella by Richard Bach. It is a fable about a seagull who dreams of more than a dreary day-to-day life of squabbling for food, and teaches himself to fly farther and faster than any bird could imagine. But he suffers terribly in the course of his journey of self-discovery: both physical trauma from the stresses he puts on his body and ostracism from the Flock, who cannot begin to understand the idea of a seagull who just wants to fly.

Dying on the wing after a long life of isolation, Jonathan ascends to a higher level of spiritual existence, where he discovers that he's not the first to have done so. Unlike his new peers, however, Jonathan chooses to return to the mundane world to teach others to follow in his path.

The book was adapted into a feature film in 1973 with an award-winning musical score by Neil Diamond. Bach would continue the themes of reincarnation, transcendence, and higher realities in Illusions: The Adventures of a Reluctant Messiah; both novels were highly influential in the spiritual movements of The '70s.