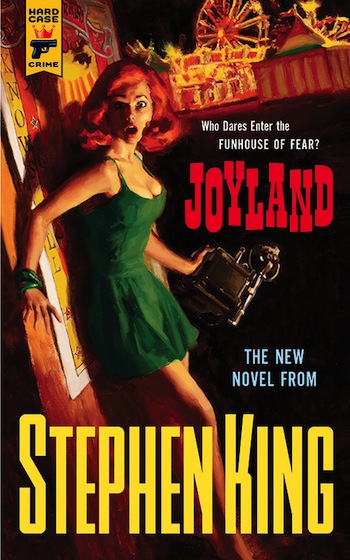 Released in June 2013, Joyland is Stephen King's second novel for the Hard Case Crime imprint, following The Colorado Kid (2005). The novel is primarily a murder mystery/thriller, but considering who the author is, it should come as no surprise that there are significant supernatural elements involved, too.
Advertisement:

The novel is set in the summer and autumn of 1973 and follows Devin Jones, a twenty-one-year-old college student from New England who takes an extended summer job in a North Carolina amusement park (the Joyland of the title) after his first girlfriend breaks up with him, leaving him heartbroken. As Dev begins to make friends and learn about the carny way of life, he also becomes fascinated with an unsolved murder which took place in the park four years earlier, and the House of Horrors which is reputedly haunted by the victim's ghost.