Literature / Julie of the Wolves 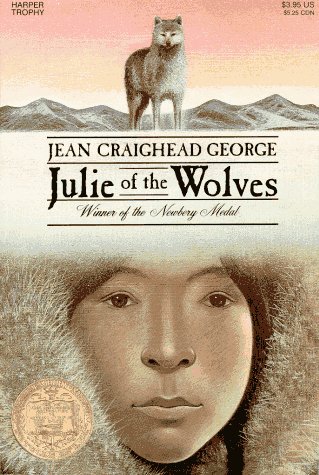 A young girl named Miyax attempts to escape from her former home and winds up lost on the Arctic tundra. She runs into a pack of wolves and rather than devouring her, she is adopted by them. The book deals with her struggle to learn how to communicate with wolves and her reasons for leaving.

The first novel, Julie Of The Wolves was written by Jean Craighead George in 1972, and two sequels, Julie and Julie's Wolf Pack, followed. The first installment is often studied in classrooms and is also one of the most frequently banned books in classrooms due to its portrayal of death, rape, violence and menstruation.

There are commented out Zero-Context Examples.