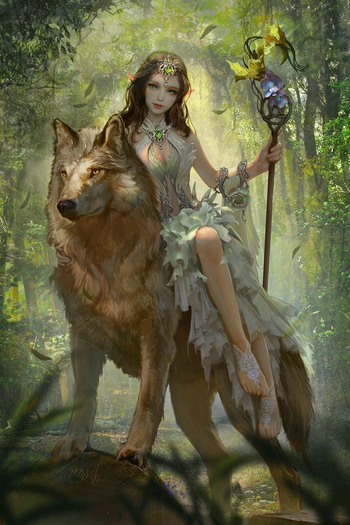 "The jackal may follow the tiger, but Cub, when thy whiskers are grown,
Remember; the Wolf is a hunter. Go forth, and get food of thine own!"
— Rudyard Kipling, "The Law of the Jungle", The Second Jungle Book
Advertisement:

As wolves became less common in inhabited areas, people became less wary and more curious of them and started to look at their positive traits. No longer seen as simply destructive beasts, they were soon written as proud and admirable symbols of nature that were intelligent, dignified and reasonable. Though still dangerous, if a Noble Wolf is antagonistic, it's probably not just because it hates you or wants to eat you. Rather, an antagonist Noble Wolf will probably have been offended at your trespasses or your competition for resources.

Though leaning more towards neutrality, a Noble Wolf can easily be a heroic figure. With their intelligence, a doglike figure and social nature, it is easy to pick out good traits to emphasize. Any heroic wolf of this sort will be a force to be reckoned with as wolves are still taken very seriously today. Bonus points if the wolf is white.

A Sister Trope to Heroic Dog and Wonderful Werewolf. See also Heroic Dolphin. Compare and contrast Savage Wolves. This trope as it pertains to positive traits of male wolves is the origin of Papa Wolf. Having a lupine ally or pet is another trope, i.e. Canine Companion.