Film / The Journey of Natty Gann 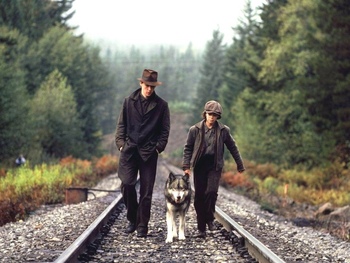 The Journey of Natty Gann is a 1985 picaresque live-action Disney film starring Meredith Salenger, Ray Wise, and John Cusack in one of his earliest major roles.

It's 1935, and with The Great Depression in full sway, finding a job is a matter of life and death. So when single dad Sol Gann (Wise) gets an offer to travel to the state of Washington to work as a logger, he can't possibly afford to refuse — even though it means leaving his daughter Natty (Salenger) behind in Chicago until he can afford to buy her a train ticket to come join him.

Unfortunately, that takes time, and in the meantime everybody but Natty herself starts coming to the conclusion that she's been abandoned. When she realizes that she's about to be handed over into the custody of the state, Natty takes off on her own, hopping a train and heading west to try to find her father herself, no matter what obstacles she runs into along the way.