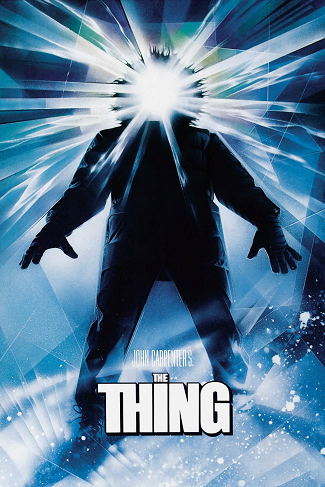 Man is the warmest place to hide.
"If I was an imitation, a perfect imitation, how would you know if it was really me?"
—Childs
Advertisement:

A much more faithful adaptation of John W. Campbell's novella Who Goes There? than Howard Hawks' The Thing from Another World, The Thing is a 1982 Sci-Fi Horror film directed by John Carpenter and written by Bill Lancaster. With a leading cast of Kurt Russell, Wilford Brimley, Keith David, Richard Dysart, Charles Hallahan, Richard Masur, and Donald Moffat, the film is the first entry in Carpenter's "Apocalypse Trilogy", the others being Prince of Darkness and In the Mouth of Madness.

The film focuses on twelve men who are stuck in an Antarctic camp for the winter of 1982. After finding that the neighbouring Norwegian camp has been mysteriously destroyed, they realize that a deadly alien life form is on the loose. Most terrifying of all is the fact that this alien can change shape, infecting a person on a cellular level and then relentlessly absorbing and duplicating their cells, imitating them from the inside out until there is nothing human left. Therefore, at least one among them may be the Thing.

While a commercial and critical bomb when it was first released (partially due to comparisons to a much more family-friendly movie involving an alien released around the same time), The Thing has gone down as a remarkable example of what time can do for a film. These days, it has not only been very successful on VHS and DVD, but is a staple among discussions of the best sci-fi/horror films of all time. Such a reputation is due in part to its exemplary use of Paranoia Fuel, its unique subversion of Nothing Is Scarier while still retaining every ounce of Paranoia Fuel, and its graphic effects.

The visceral depictions of the anatomically creative forms the lifeform adopts when attacking or threatened were milestone achievements in both Special Effects rigging and creature design thanks to a fusion of masterful puppetry, makeup, and advanced FX rigging, bolstered by new green-screen effects like high-end claymation, matte painting, and early CGI. By using each for the tasks it did best, and combining several approaches in a single shot to create seamless composite effects, Carpenter and co. left surprisingly little room for Narm to set in, and created one of the first cinematic environments to believably pull off Daylight Horror sequences. The film's effects have since been cited as influences for later franchises like Dead Space — especially the third one, as both take place on remote icy outposts.

In a serious case of either Tempting Fate or Paranoia Fuel, The Thing (along with The Shining) is screened every year for those "wintering-over" at the Amundsen-Scott South Pole Station, after the last plane leaves them in the long winter blackout.

Its popularity has caused the story to be continued in other media. In the 1990s, Dark Horse Comics published a series of four comics continuing the film's story, called The Thing from Another World. A video game sequel (also simply called The Thing) was made in 2002 - please go there for game related tropes. And lastly, a prequel, (also simply called The Thing) focusing on the Norwegian camp prior to the events of this film was released in 2011, starring Mary Elizabeth Winstead. In January 2020, it was reported that a remake of Carpenter's original film was in development at Blumhouse Productions and Universal Studios, this time adapting Frozen Hell, the original novel-length iteration of the story that the novella "Who Goes There?" was shortened from.

Halloween Horror Nights 2007 in Orlando introduced a house that was a sequel to the movie, featuring the alien being moved to a new research station in Florida, but whether or not it is canonical is unclear (most likely not).

A board game by USAopoly called "The Thing: Infection at Outpost 31" was released in late 2017. The tabletop game follows the exact plot of the movie and follows the spirit of the film that it's based off of.

This film contains imita- uh, I mean examples of:

Those poor bastards in the snow
They were clueless, now they know
It's a special brand of nightmare that I bring
'Cause they thought I was a dog but I~'m
The~
Thi~ng!!!