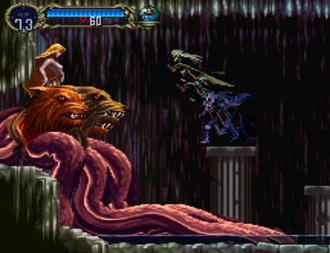 Siren, she ain't.
"Oh, what do you know, it's a uni-whale-scorpio-Pega-squid-icorn-girl. What are the odds. You know, taken all together, it's more ridiculous than scary. I guess it doesn't have a cumulative effect."
— Malifishmirtz, Phineas and Ferb episode "Excaliferb"
Advertisement:

Despite the patchwork nature of this form, it does still have some advantages. Like the power of intimidation, its supermassive size with strength and durability to match, and an Anatomy Arsenal stocked with every variety of Breath Weapon known to man (if not more), and can easily wipe out entire armies that approach anywhere within its "Instant Death" Radius.

However, this form may have severe drawbacks over the individual component forms, and it's likely to be rather slow due to size, highly unstable, or prone to catastrophic failure. If the shapeshifter can't keep focus he may enter a Superpower Meltdown where the Loss of Identity causes the body's components to attack each other, with the potential to become the very goriest of Shapeshifter Swan Songs.