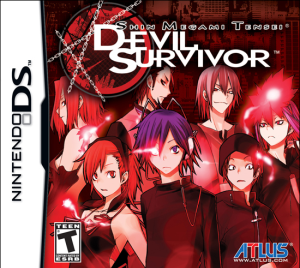 Devil Survivor is a Strategy RPG game in the Shin Megami Tensei Spinoff series Megami Ibunroku / "Alternate Tales of the Goddess", developed by Atlus and released in 2009.

Devil Survivor entails the story of three Ordinary High School Students: an eleventh grader (the protagonist) and his friends, everygirl Yuzu Tanikawa and computer geek Atsuro Kihara. One summer day, the protagonist's cousin Naoya calls them over to his place and gives them three popular hand-held computers (Communication Players, or COMPs) with his own custom firmware installed. Tinkering with the firmware, Atsuro unlocks a hidden Demon Summoning Program that releases demons right in front of the three startled friends.

Just when they are recovering from this shock, their COMPs receive emails that seemingly predict the future. Sure enough, the events predicted in the "Laplace Mail" come true and demons are unleashed upon Tokyo, causing the government to impose an immediate military lockdown on the entire Yamanote Circle region of the city.

The Protagonist and his friends must now use their custom COMPs to survive the lockdown between the increasingly-panicked citizens, the invading demonic armies and those who would seek to use the power of the COMPs for their own ends. In addition to the COMP's ability to summon and control demons, our heroes have two main tools to help them survive: the Laplace Mail, which comes every morning and predicts disasters that will occur that day, and the Death Clock (not to be confused with Dethklok,) which displays how many days a person has left to live. Unfortunately, according to the Death Clock it seems that a terrible incident will take place on the seventh day of the lockdown, killing everyone within the Yamanote Circle... if the various dangers within the Yamanote Circle don't kill them first.

Devil Survivor is an interesting fusion of the old with the new. The basic scenario and first-person battle system is very similar to that of Shin Megami Tensei but with the modern style and character-driven gameplay of Persona 3 and Persona 4. Devil Survivor is also the most player-friendly Shin Megami Tensei game yet: players can not only see a list of the demons that they can fuse and how to fuse them, but they can choose exactly what skills they inherit and even teach them new abilities. Don't take this to mean that Atlus is making the game any easier, because they're not.

An Updated Re-release on the 3DS, Devil Survivor Overclocked, was released on August 23rd, 2011. The port features more demons (approximately 150, 21 more than the original), full voice acting, the ability to select difficulty, and "8th Day" Playable Epilogues for certain endings.

A thematic sequel, Devil Survivor 2 was also released for the DSnote and had its own 3DS Updated Re-release.

Artistic qualities seem familiar to you? The character design is done by none other than Suzuhito Yasuda! See also Future Diary for a similar concept of "Laplace Mail". Compare and contrast The World Ends with You, which also features a seven-day storyline in Shibuya.