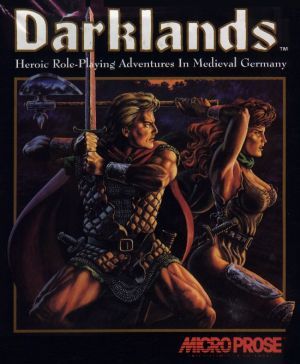 You come upon a page for a work which has been tended like a garden and contains much text. A gargoyle perched on a nearby tombstone eyes you cautiously, while a red-haired fortune teller welcomes you. You decide to...
...read the page using your Read & Write skills.
...draw weapons and attack the other tropers!
...throw an alchemical potion of "Wiki Magic" at the page.
...pray to a saint for assistance.
...leave this page for other adventures.
Advertisement:

Darklands is a Wide-Open Sandbox and Role-Playing Game by MicroProse, released in 1992 for DOS. Its most defining trait (there are many) is that it is set in 15th-century Central Europe, and turns real-world cultural lore and even religion into a background story.

In Darklands, an adventuring group of four characters sets out from very humble beginnings to make a name for themselves and (potentially) save the world from the dark forces of The Devil. The game aspires towards realism with its unique setting - the late medieval Holy Roman Empire - allowing the characters to visit many cities across renaissance-era Germany, Denmark, Poland, and Switzerland. Your characters wear armor and use weapons that did indeed exist during this era (including inefficient but deadly handguns!). They spend much of their time battling brigand-lords, sucking up to the clergy, and running errands for civilian organizations such as the Hanseatic League. They can work for a living, struggle to maintain a decent reputation, and perform many other mundane activities that most RPGs simply take for granted.

On the flip-side, the world of Darklands incorporates real-world mythology as de-facto reality. Alchemy actually works, so the staple "Wizard" class character is replaced by an Alchemist who concocts various and potentially dangerous potions from alchemical materials. Christian saints can actually bless your teammembers if you pray to them, so a "Cleric" must be a pious man versed in the properties and abilities of dozens of different saints. Monsters are taken right out of Central-European medieval lore, including gargoyles, dwarves, witches, and even the occasional dragon, along with more exotic fare such as the schrat, the holzfrau, and the dangerous Wild Hunt.

Darklands is perhaps one of the more hard-core RPGs out there, a fact that becomes apparent as early as the character creation menu. Instead of freely assigning points to skills, the player must build up each character's background, past career choices and life experiences, which in turn set a hard limit on how those points can be distributed. There are about two dozen skills in total, making it difficult to create a party that covers all of them adequately; and each skill has a major impact on at least one important aspect of the game. Survival is tough, especially because the game doesn't scale down encounters; If you're not careful, you can easily run into enemies that are far too powerful for your party to defeat. Magical weapons are extremely rare, so you can expect to play most of the game with just the "mundane" weapons of the period - but this nevertheless includes a vast array of weapons and armor, each with its own advantages and drawbacks to consider.

Despite many bugs and other issues with its original release, Darklands managed to stay popular with hard-core RPG gamers over the years, and is remembered very fondly even by players who didn't manage to get very far in the game. It should be noted that, for the most part, the game is a Wide-Open Sandbox with virtually no mandatory objectives. With so many different things to do and places to visit, finishing the game becomes almost an afterthought. Even if you do manage to complete the very long main quest, the game never really ends; Characters slowly age out and retire, and can freely be replaced at any time with fresh recruits. Though the game keeps track of the passage of time, the setting itself never moves past the 15th century.

Darklands is currently available as a digital download on GOG.com. Unfortunately, while there have been many calls from the fanbase to remake the game, these calls go unanswered. A sequel was originally planned, but scrapped early on. It remains to be seen whether another developer will pick up this very, very heavy gauntlet.