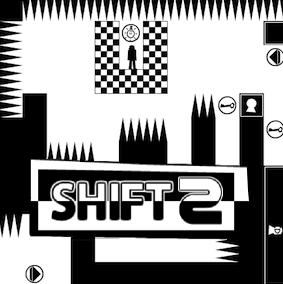 Welcome to Shift, your not so ordinary puzzle platformer.

Shift is a quadrilogy flash game series about test subjects that have to reach the exit, utilizing a power known as "shift". When the test subject shifts, they invert into the ground below them, making the white tiles the foreground and the black tiles the background. As the game progresses to sequels, new things are added such as tiles you can't shift on as well as arrows that shift gravity.

Truthfully, the company that's performing the experiment has actually captured a father, mother and son to use them as test subjects to experiment on them in secret. As the series progresses, the family tries to escape.

The first game was released in 2008, and the entire series is available at Armor Games, Newgrounds and Kongregate. Go here.

A Gaiden Game by the name of Shift: Freedom has been released. It was initially exclusive to the iPhone. Additionally, an adaptation called Shifting World made by Aksys was be released in April 2012 for the 3DS.

No relation to Need for Speed: Shift or its sequel, Shift 2: Unleashed.

This flash game has examples of: