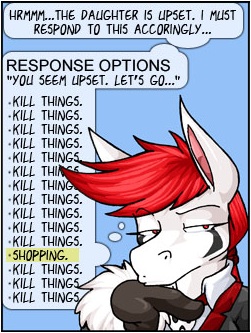 Hey there, Troper! What brings you to the Dialogue Tree page?

I thought so. Well, a Dialogue Tree is a common feature of Role-Playing Games and Adventure Games, where interactions with certain Non Player Characters are done by selecting a possible response from a list of two to five choices. As you might imagine, this can lead to frustration as the player tries to figure out the correct sequence of responses to get what he or she wants out of the NPC.

They're one of those Acceptable Breaks from Reality, since fishing for correct vocabulary and grammar that actually yields a result can be drag on gameplay for any genre other than Interactive Fiction, and some old-school RPGs that implement a Keywords Conversation mode (if you want to know what that's like, just click on any wikilink in this paragraph). The games industry's standard of fully voiced dialog also makes it prohibitively expensive in voice acting hours, and the technology for synthetic voice hasn't progressed far enough past Robo Speak for a satisfactory cost-effective substitution. On the upside, some games use Dialogue Trees to allow the player to try out their non-combat skills or abilities, or affect where on the Karma Meter the Player Character turns out.

[FAILED] No thanks, I'm seeing a nice page from the Sugar Wiki. Anyway, this can also be a form of Truth in Video Games, as it accurately captures the genuine excitement of calling the customer-service number of your ISP or phone company. So, do you understand now, or Shall I Repeat That?

Okay then. And remember, nothing's more annoying than the illusion of choice. And on that note, how would you like to do a long and tedious Fetch Quest? See, I need 20 Bear Asses for no adequately-explained reason, and I have a hunch that the Broken Bridge out of town won't be fixed until I get them. Will you help me?

Brutalmoose interacts with his tribemates in "Survivor: The Interactive Game"

Brutalmoose interacts with his tribemates in "Survivor: The Interactive Game"