Video Game / The Dame Was Loaded 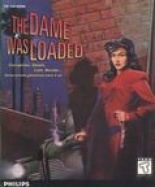 The Dame Was Loaded is a first person, point-and-click adventure game for the PC platform created by Australian developer Beam Software (now Melbourne House) and first published in 1995 by Philips Interactive Media domestically, then in 1996 world wide. The game is a detective Film Noir set in the 1940's and combined live action cinematic's with pre-rendered point and click game play much like previous games in the genre like Under A Killing Moon and Myst. The live action was outsourced to Vixen Films and at the time was the largest multimedia production ever made in Australia.
Advertisement:

The game is non-linear, having nine possible endings, featuring over thirty characters to interact with, and over an hour of FMV cinematics.