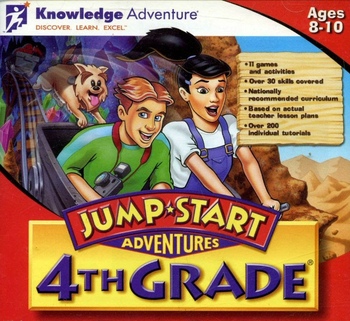 The plot concerns the town of Sapphire Falls, where the historic Sapphire Mines are thought to contain a lost treasure. Recently, a mysterious creature has shown up and started scaring everyone away from the mine. Here to investigate are Sally Chu and T.J. Adams, a pair of School Newspaper News Hounds, plus their Heroic Dog Gizmo. Will they be able to crack the case as well as find the lost treasure? Only if you know your fourth-grade subject matter!

The game's format is actually more reminiscent of The ClueFinders than previous games in the JumpStart series, which includes the older version of JumpStart 4th Grade. Instead of a Wide-Open Sandbox, there are a series of areas that you advance through. The two main areas have a Fetch Quest, the first with gems to open a secret passageway and the second with clues to the identity of the villain. The final section of the game is a Rollercoaster Mine in which you chase the villain to the lost treasure.