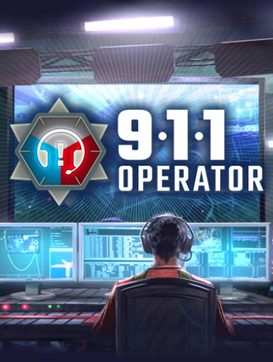 People's lives are in your hands!
Advertisement:

911 Operator is a Real-Time Strategy/Simulation Game developed by Polish studio Jutsu Games and published by PlayWay S. A.. It was funded

by a Kickstarter campaign on August 20th, 2016, and was then first released on PC through Steam in February 2017. It was later released to Xbox One, Playstation 4 and Android devices later that year. A release for the Nintendo Switch followed in October 2018.

In this game the player takes the role of a 9-1-1 telephone operator who must take calls for emergencies and then dispatch firefighters, paramedics, and police officers to where they are needed. The game had two DLC Packs released. The first, Every Life Matters, added reinforcements to aid in assigned calls as well as events mode during free play style. The second DLC Pack Special Resources added new emergency vehicles and tools to use on calls.

A sequel, 112 Operator, was announced in September 2019, and was funded

the following month. The sequel moves the focus to cities across Europe but also includes more content such as bigger city maps with 3D renders and the progression of seasons with changing weather that changes the kind of emergencies that happen. The game includes all the same features as the first including the ability to play in any major city in the world.