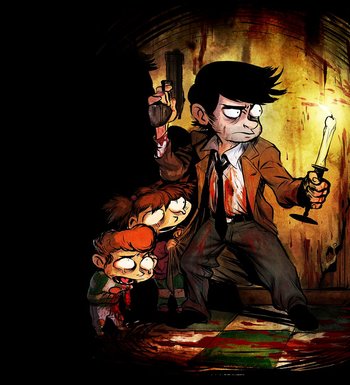 Don't let the art-style fool you. This game is absolutely not for children.
Advertisement:

2Dark is a 2017 isometric Stealth Survival Horror game by Gloomywood, published by Bigben Interactive and created by Frederick Raynal (creator of Alone in the Dark). Set in the year 1976, it tells the story of Mr. Smith, a detective whose life was turned upside down seven years ago when his wife was murdered and his children kidnapped while they were on a camping trip. He explores the town of Gloomywood to solve a mystery involving disappearing children.

After 2Dark's release, people saw that the game was protected with the DRM Denuvo. During the Ulule campaign, Gloomywood promised that the game was going to be DRM-free. As of April 19, 2017, six days after having been cracked by CPY, Denuvo was removed from 2Dark.

Tropes that apply to 2Dark: