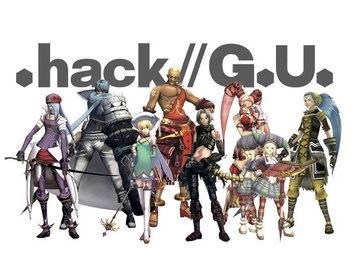 Taking place after the events in .hack//SIGN and the original .hack games, the popular MMORPG "The World" is open for business yet again. Well, the new World. The old one was destroyed when the servers mysteriously burned down. The new world is a bit Darker and Edgier these days with all the Player Killing. The PKK (Player Killer Killer) from .hack//Roots, Haseo, has become legendary in his own right. As a hunter; he has killed hundreds of Player Killers and has gained the title The Terror Of Death. Yes, the same title the first Boss in the first game series had. He is hunting down a mysterious Player Killer known as Tri-Edge, for this mysterious Tri-Edge PK'd Haseo's girlfriend Shino, and she fell into a coma in real life.

After being attacked and Data Drained by Tri-Edge, Haseo is found by a mysterious organization known as Raven, and joins its ranks, unleashing a hidden power in his character data known as Skeith.

All the while, a mysterious computer phenomenom called AIDA is threatening the existence of "The World" and quite possibly the entire Internet.

Like its predecessor the game is split into multiple parts, or volumes:

Character Sheets are here, tropes related to them should be added there.

A remaster of the game, .hack//G.U. last Recode was announced to celebrate both the original trilogy's tenth anniversary and the 15th anniversary of the the .hack franchise as a whole. It is set to be released on the PS4 and PC through Steam, with various enhancements, a new form for Haseo, and an entirely new fourth volume of the story: Reconnection, “Or Dreams the Snakes That Spin the World Dream.” Here's the first teaser

The games contain examples of the following tropes: