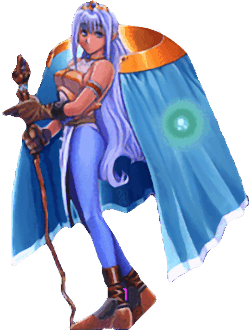 Just one of the ways her cape is pimped out.
Advertisement:

Any part of an outfit that floats independently from the rest of the clothing. Done almost entirely for Rule of Cool, as there is little practical purpose for this.

Sometimes this is justified by magic or Applied Phlebotinum, but even when it's not, this trope usually appears in fantastic or futuristic settings.

In Far East Asian mythology (China, Japan, Korea) one trait the gods have, which is mostly associated with female gods, is the ability to defy gravity. This is reflected in art, where you'll see the gods have flowing hair and stoles (called hagoromo) that float in the air.

A Holy Halo counts as this, when depicted as a floating circlet.

Compare Impossibly Cool Clothes (which can even overlap with this) and Power Floats (which usually does).

Not to be confused with clothing that gives the wearer anti-gravity abilities, that would be Clothes Make the Superman.