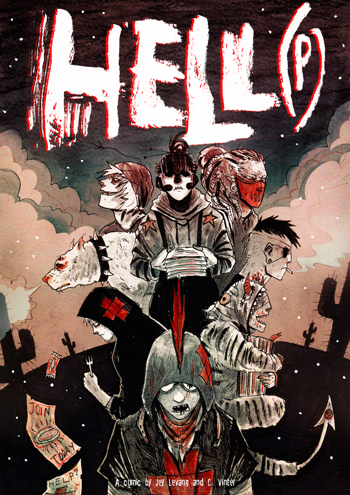 “We are Help Service! Want a business card?”
— No. 1
Advertisement:

Hell(p) is a horror/fantasy webcomic by Oliver Levang aka Harkill and C. Vinter aka Ckirean. Set in a Mundane Afterlife version of Hell, the story follows the Help Service — a group of individuals who make a meager living by running errands for money. One day, while chasing a potted plant down the street, they stumble across a contest that promises the winner a ticket to Heaven. A way out? What could possibly go wrong?

Intended to be a fun blend of horror and comedy, Hell(p) features a gritty visual style relying mostly on black, grey, and red. The characters look like they barely escaped a massacre at some underground punk house and the whole setting has a noticeable lowlife aesthetic to it, not dissimilar to that of some post-apocalyptic works. Think Wretched Hive with supernatural elements and kooky weirdness woven into the everyday life with a very generous splash of blood.

Although Hell(p) was not conceived as an Interactive Comic, there has been quite a bit of audience participation, mainly in the form of two “Create a Character” competitions hosted on deviantART. The authors invited everyone to submit an Original Character for the comic. The few winning characters were then adopted, modified, and integrated into the cast. The authors (particularly Harkill) are also known to interact with fans a lot, resulting in quite a bit of Word of God.

. Updates are every Friday with Tapas lagging behind Patreon by a couple of pages. There's also a considerable amount of supplementary material, like sketches, posters, bonus strips etc. available here