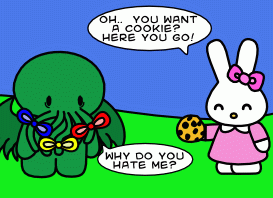 Take the kid-friendly, impossibly cute character that is Hello Kitty. Take the Lovecraftian Eldritch Abomination that is Cthulhu. Combine them and see what happens...

is a Webcomic which chronicles the misadventures of titular Cthulhu, as he strives to spread evil and taint in the cute world of Hello Kitty. He quickly discovers that other Elder Things are here too: Dagon, the fish god (who runs a fish shop) and the Colour From Out Of Space (who quickly turns into a depressed alcoholic).

Other characters include: the cute Hello Kitty denizens, two 50 Foot Whatevers, a heroic piece of toast, a pirate banana, talking muffins, dancing marshmallows... and others.