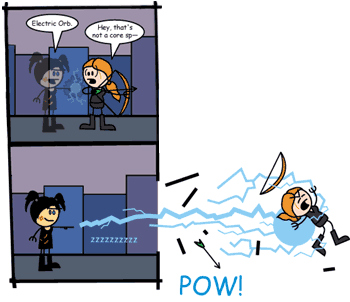 A Painting the Medium and Medium Awareness trope, where characters interact with the confines of the scene. For example, interacting with borders around comic strip panels by crashing through the side or falling out the bottom. In live-action media, it might be implied that two characters are in two completely different locations, only to subvert this by having one of them reach into the other scene. It can also have objects in the frame enter the letterbox to emphasize or simulate a 3D effect.

A Sub-Trope of Odd-Shaped Panel and Metafictional Device.

Particularly common in Webcomics, as a fairly straightforward way to employ the Infinite Canvas.