A Hell of a Time 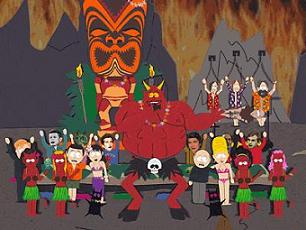 That's one hell of a luau!
"Go to Heaven for the climate, Hell for the company."
— Mark Twain
Advertisement:

The Anti-Hero (or the villain) has finally perished and gone to the afterlife. Of course, his track record denies him entry to Heaven, so he finds himself tumbling to that Other Place. But the strange thing is, it doesn't seem to be that horrible. Sure, there's fire everywhere, the paintwork's flaking, and the occasional moans of the damned ruin the ambience a tad, but overall, it's a place you could get used to.

Often combined with the Ironic Hell (if a particularly Jerkass character dies, then Hell for them may well involve being showered with love and pretty pink ponies), or Lord Satan just not wanting the badass hero to screw things up for them. Sometimes, it can be that Hell is only a nice place to the evil — the merely "not quite good" still suffer for all eternity. Of course, if Satan Is Good, all bets are off — Hell may even be a nicer place than Heaven.

Also often combined with Rock Me, Asmodeus! and The Dead Can Dance. Joining the fun may be the motivation for the Hell Seeker, and someone who thinks damnation is fun will likely be Not Afraid of Hell. Hell of a Heaven is the inverse, when Heaven isn't all it's cracked up to be. Usually a form of Mundane Afterlife. See also Unishment and Too Kinky to Torture.

Alternative Title(s): Hell Of A Time