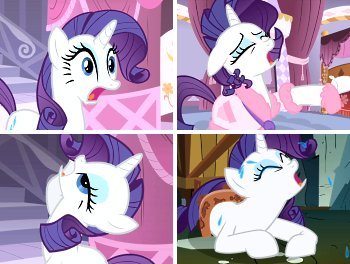 Oh, why did you have to choose such horrid pictures of me? Everyone will just laugh at me now! My life is RUINED!!!
"Of all the worst things that could happen, this is THE! WORST! POSSIBLE! THING!!"
— Rarity (on three occasions in one episodenote She actually means it the third time.), My Little Pony: Friendship Is Magic, "Lesson Zero"
Advertisement:

I would just die of a shattered heart if you didn't Describe Drama Queen Here!

Characters who act dramatically a lot of the time, or at least when they have little reason to.

Whether it's Fainting, hysterics, acting like they are in a second rate drama, or hyperbole to the point of bursting from it, the characters just live to be over-dramatic, even to the point of Chewing the Scenery and being a Large Ham. They also love Wangst and the tropes overlap.

Even if not everything is a crisis, when it is a crisis, it is more important than anything else could possibly be. They could be in the hospital, but who cares about the guy with the broken leg? They have a hangnail!

Although this is usually Played for Laughs, the term actually started as a nickname for Histrionic personality disorder.

Yet over time, people would use the term, even about themselves, to describe people who were just being dramatic all the time. Darker examples are usually deeply unpleasant people who are continually at the epicenter of something that they swear they didn't create or invite (though a casual examination will reveal that they either caused or substantially fed into it), habitually blaming others for their own terrible choices, dragging anyone unfortunate enough to be on the sidelines into the mire, and generally living incredibly messy lives with no insight into how they got that way; what little insight they do gain typically either results in an Ignored Epiphany or is only used as an opportunity to grandstand for attention. As the saying goes, "if it smells like shit everywhere you go, check your shoes", and people who continually find themselves surrounded by chaos and strife are seldom blameless.

Teens, particularly teenage girls, are sometimes portrayed this way, often overlapping with Bratty Teenage Daughter. But this trope isn't exclusive to women. Guys can do this a lot as well, but this term is still used to describe them (occasionally the terms "Drama King" or "Drama Prince" are used, but they haven't caught on).

A Sub-Trope of Melodrama, Chewing the Scenery.

Compare It's All About Me, Sickly Neurotic Geek (who overdramatizes things in other ways), Hair-Trigger Temper (who oozes anger instead of drama, though there can be overlap), Jewish Mother (who oozes guilt trips), Psycho Ex-Girlfriend, Wangst, Angst Dissonance, and Hysterical Woman.

Contrast The Stoic (who genuinely avoids drama), Stepford Smiler (who has plenty of reason to be dramatic but isn't).