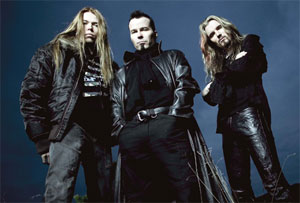 Apocalyptica is a metal band from Helsinki, Finland formed in 1993. Originally formed as a Metallica tribute band, they recorded their first album, Plays Metallica By Four Cellos. The title is not a joke.

For their first three albums (their second being a tribute album to other heavy metal bands such as Pantera, the third an album of original songs,) their line-up consisted of four cellists. They then played at a festival of which Slayer was headlining. Dave Lombardo, a fan of the string quartet, asked them if they knew any Slayer and, upon finding that they do know how to play Slayer, asked them to join him for a short set, telling them to give him a call if they ever needed a drummer. When one of the members quit in 2002, they called up Lombardo for their fourth album, Reflections; though he did not become their primary drummer, he contributed to their next two albums before officially leaving in 2007.

Lombardo is not the only member of another band they have worked with; the band has collaborated with several vocalists, most notably Rammstein's Till Lindemann, HIM's Ville Valo, The Rasmus's Lauri Ylönen, Stone Sour/Slipknot's Corey Taylor, Joe Dupalantier and Tooru "Kyo" Nishimura. They were also featured on melodic death metal band Amon Amarth's album Twilight of the Thunder God, for the song "Live for the Kill", and they have played sets with Rammstein. Kivilaakso also appeared on four tracks from Sonata Arctica's album The Days Of Grays.

For their eight studio album, Shadowmaker, they brought in Franky Perez to be their lead vocalist, breaking their trend of being an instrumental band that only brings in guest vocalists for a few songs.

This band has examples of: