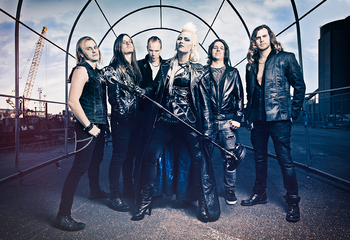 Battle Beast is a Finnish metal music band established in Helsinki in 2008. The initial line-up consisted of guitarists Anton Kabanen and Juuso Soino and drummer Pyry Vikki, who were high school friends. The rest of the original line-up, singer Nitte Valo, bassist Eero Sipilä and keyboardist Janne Björkroth, joined the band after auditions.

Noted for Power Metal with significant classic Hard Rock/Heavy Metal influence, and for being huge sci-fi, fantasy, and manga/anime geeks, they first came to prominence after winning two major band competitions in 2010. Their first album for Hype Records, Steel, came out the next year and caught the attention of metal titan Nuclear Blast Records, leading to a first tour in support of Nightwish.

In 2012, Valo chose to leave the band after getting married, and was replaced by Noora Louhimo, who sings very similarly. Kabanen left in 2015 after the release of Unholy Savior, and formed the similar-sounding band Beast in Black.

They appeared in North America for the first time in Spring 2017, supporting Sabaton along with Leaves' Eyes. Sabaton also performed a cover of Battle Beast's "Out of Control" as a bonus track on Heroes.

Noora Louhimo also frequently features as a Vocalist in the Virtual Band Pentakill as Kayle.

I wanna feel your tropes in the night...