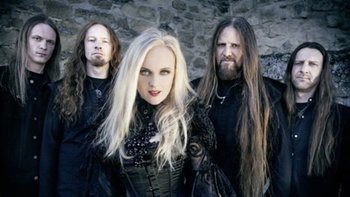 Leaves' Eyes is a German Symphonic Metal band originating in Ludwigsburg, with some additional members from Stavanger, Norway. Former singer of Theatre of Tragedy, Liv Kristine, founded the band in 2003 with former members of Atrocity. They are characterized by the beauty of their music coupled with Soprano and Gravel vocals.

In April 2016, on the eve of a world tour, the band posted to their Facebook page that they had parted ways with Liv for "personal reasons" and that she would be replaced by Finnish vocalist Elina Siirala. Fans were outraged, as they perceived the initial announcement to be very disrespectful to Liv, who was one of the band's founding members. Around the same time, it was announced that Liv Kristine and Alexander Krull had separated after 13 years of marriage. While the band initially insisted the split was mutual, Liv would later imply that she had been forced out

. Things got even thornier later on when the band's guitarist claimed Liv's therapist (and fiance at the time)note Sadly, it was announced two years later that he had passed away following a series of heart attacks and a stroke had been meddling in the band's affairs, and that he was the cause of her sudden departure.

It remains unclear as to exactly what happened, but the band has continued on and released a new album with their new singer, while Liv has joined her sister's band Midnattsol and said there is "still a lot for [her] to do as a musician on this planet