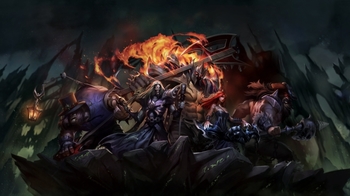 The hardest rockers of Runeterranote Left to right: Yorick, Karthus, Mordekaiser, Sona and Olaf. Not Pictured: Kayle.
Pentakill is an American Power Metal band made by Riot Games as a means of promotion of their video game. Originally, the skin lineup was just a set of skins for players to purchase for cosmetic reasons, but demand was high enough that a defictionalization was made. Their music can be downloaded here

This Band Provides Examples of The Following