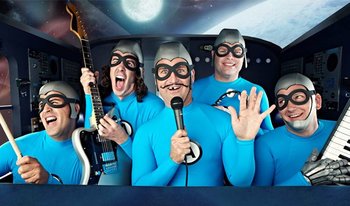 The Aquabats! (and yes, the exclamation mark is necessary) are an American comedy rock band formed in Orange County, California in 1994. The band started out as an eight-or-nine-piece ska band before shifting their sound towards a more New Wave-influenced style of rock and punk in the early 2000s.

The most distinctive - and most Troperiffic - aspect of The Aquabats! is their prominent superhero theme. The band bills themselves as a ragtag group of superhero rock musicians, traveling the world on a quest to fight evil and rock out in equal proportion. Many of The Aquabats' songs revolve around this theme, featuring lyrics detailing the band's adventures and battles with their Rogues Gallery of villains, as well as their theatrical stage shows which include comic skits and fight scenes with costumed villains and monsters.

Accordingly, each member of the band has their own superhero persona; as of 2006, The Aquabats consist of singer and Face of the Band the MC Bat Commander, bassist Crash McLarson, keyboardist Jimmy the Robot, drummer Ricky Fitness and guitarist EagleBones FalconHawk.

After years in Development Hell, The Aquabats succeeded in producing their own starring television series, The Aquabats! Super Show!.

Also notable is the fact that Christian Jacobs, the MC Bat Commander, is the co-creator, writer and voice actor of the children's show Yo Gabba Gabba!.