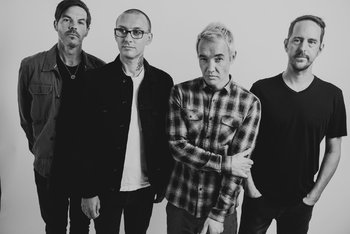 Hoobastank is a Post-Grunge/Alternative Rock/Pop Rock band from Agoura Hills, California. After performing at the Cobalt Cafe with Incubus for a while and independently releasing two Funk Rock albums they finally got a record deal in 2001 (at which point their sax player Jeremy Wasser left the band) and soon it seemed the first three singles of their Self-Titled Album debut was going to make them a Three Hit Wonder. Then in 2003 their second album, The Reason (which ditched their Nu Metal influences) was released and the Title Track topped most modern rock charts, reached #2 on the Billboard Hot 100 and played on the Grand Finale of Friends. They accompanied Linkin Park on the Meteora tour the same year. They released Every Man For Himself in 2006, For(N)ever in 2009, Is This The Day in 2010, Fight or Flight in 2012 and Push Pull in 2018.