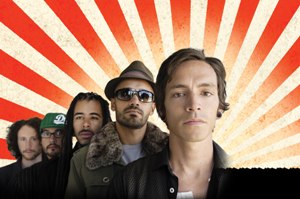 Left to right: Mike Einziger, Jose Pasillas, DJ Kilmore, Ben Kenney, Brandon Boyd
"The world's a roller coaster and I am not strapped in,
Maybe I should hold with care but my hands are busy in the air."
"Wish You Were Here"
Advertisement:

Incubus are an Alternative Rock band formed in 1991 in California. They released eight studio albums and two EPs (and one Greatest Hits Album), and have reached multi-platinum sales.

Over the course of their career, Incubus have grown to be quite the Genre Roulette outfit - they went from Mr. Bungle-esque Funk/Rap Metal mixed with Jazz and other genres, to more melodic alternative rock, at times slipping to retro, ethnic and art-rock areas. On If Not Now, When?, they mellowed their sound out a bit to some less visceral modern rock. Their EP Trust Fall (Side A) and album 8 are somewhat of a return to a more alternative rock-based sound.

Not to be confused with Incubo.

Incubus and their music provide examples of the following tropes: