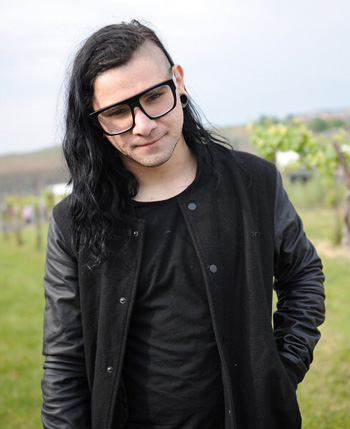 His name is Skrillex.
"I never set out to be part of a genre, because I listen to all types of music."
Advertisement:

Sonny John Moore (born January 15, 1988), better known as Skrillex, is an electronic music producer best known for being the poster boy of dubstep. He's also a great name to drop if you want to send someone off on an angry tangent or make a new best friend.

Formerly the lead singer of screamo/metalcore group From First to Last, Moore quit the band in 2007 in order to pursue a solo career. In 2008, he began making music and deejaying under his current aliasnote which, by the way, is just a childhood nickname that doesn't really mean anything according to him. In 2010, he was picked up by Mau5trap Records and began making a splash by touring with established electronic music producer deadmau5. Skrillex has been the buzz name in electronic dance music ever since, having picked up eight Grammy Awards along the way. He reunited with From First to Last with 2017.

Born in Los Angeles, California, Moore was raised by two adoptive parents, Scott and Francis Moore. He began writing music when he was 9, after receiving a guitar from his father as a gift. At age 12, he started attending local concerts, primarily as a way to make friends and socialize, as he was home schooled. Moore started several bands around this time before joining From First to Last when he was 16. He was originally slated to play guitar for the band but was changed to lead singer after he was heard singing by studio producers.

In June 2004, Epitaph Records released the band's first full-length record with their new bandmate, Dear Diary, My Teen Angst Has a Body Count. After performing on several successful tours (two of which being the Vans Warped Tour and Dead By Dawn tour), they began recording their second album (with former Limp Bizkit guitarist Wes Borland playing bass), Heroine, released in March 2006. The album garnered high sales and, once again, the band found themselves in another slew of tours.

Unfortunately, Moore started suffering vocal problems, causing FFTL to resign from touring. After going through a successful surgical procedure, Moore informed the band he would be permanently resigning to work on a solo career. He returned to the band in 2017.

Moore would spend the next few months releasing demos via MySpace. He toured with a few bands and contributed to Wes Borland's Black Light Burns project, but never really made it big under his Sonny Moore solo work, though he continued to make music with various bands as Sonny Moore into 2009.

In 2008, Moore began deejaying under the name Skrillex at clubs in the Los Angeles area, and in 2010 he released his official debut EP under the name, My Name is Skrillex, as a free download. Later in the year, Sonny began a nationwide tour with deadmau5 after being signed to Mau5trap Recordings and released his second EP, Scary Monsters and Nice Sprites. His first full album as Skrillex dropped in 2014, called Recess. He's also been working on side projects Dog Blood (with fellow producer Boys Noize) and Jack Ü (with another fellow producer, Diplo).

He also composed the opening song for Kingdom Hearts III, "Face My Fears". And as a Record Producer, he has produced music for several artists including Justin Bieber, Mariah Carey, Lady Gaga, and FKA Twigs.

His current music tends to have a very light-versus-dark vibe to it, bright melodies contrasted with harsh bass drops, and spans many sub-genres of electronic music. Some hail him as a new wave of electronic music, bringing in fresh fans and faces, while others claim that he changed it and now it sucks, especially in regards to his dubstep material. Has Skrillex simply altered the landscape of EDM, or has he destroyed it? Only time will tell.