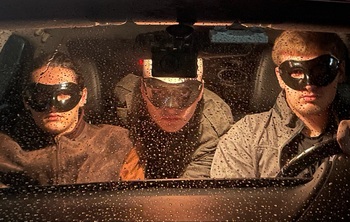 Formed in June of 2021, Self Insert is an experimental hip hop trio that consists of Sebastian Hedge, Zakary Waxman, and an unknown third member.

The band is known for a unique use of drastic voice changing effects, loud and hyper-realized electronic production, and subversive lyrics that often invoke different mechanical characters inside some kind of bizarre deconstructive scenario.

Self Insert seems to regularly update their Official Website

. The band is also on all streaming platforms, including Youtube