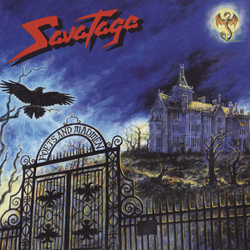 Poets and Madmen is a 2001 album by Savatage, and the final album before their hiatus.

It is a Concept Album that features a back story but no actual narrative. Three teenagers—Daryl, Joey, and Tommy—go to explore an abandoned mental hospital, discovering that one remaining patient, Carter.

stealing Daryl's jacket, Carter bolts for a room where he bars the door. When the boys catch up they find that he left the jacket along with the car keys outside, he had only took a single cigarette.

Daryl Slides his lighter under the door to which Carter accepts, sliding it back to him. While he smokes in peace they dig through his old files, learning that he was a famous photographer who abandoned his lover and career because of the horrors he saw.

The boys leave him alone in the hospital. In time, Daryl hears that Carter had committed suicide, and he returns to the hospital annually to leave a cigarette in tribute.

Poets and Madmen marks Jon Oliva's return as the lead singer of Savatage since Streets: A Rock Opera a decade before.