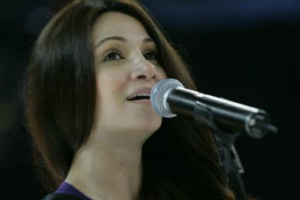 Diana Haddad (born 1 October 1976) is a Lebanese recording artist who rose to fame as soon as she released her first album in 1996, titled ساكن (Saken). Her next albums helped her rise to fame across the Arab World.

Born to a Christian father and a Muslim mother, she was the third of five children. She moved with her family to Kuwait from Lebanon to escape the civil war, and then back to Lebanon to flee the Iraq-Kuwait War. She was a tomboy growing up, and had a affinity for chocolate, which caused her grandfather to hide it from her growing up. Her father was against her pursuing a music career, and she often snuck out to singing contests.

She got married at the age of 19, which was followed by controversy and rumours of the marriage being a marriage of convenience, and in 1999, after her mother had died, Diana studied and converted to Islam, and since then, there have been rumours on her changing her religion once more, all of which Diana denied.

She gave birth to two daughters, born in 1996, and in 2007. She and her husband divorced in 2009, after 14 years of marriage. She has stated that she does not regret the marriage, but would not allow her daughters to be married at an early age.

After several delays, caused by her divorce, almost being robbed, and the death of her father, Diana released her 2011 album to much success and praise. Her voice is considered one of the most recognisable in the Middle East, and is often described as Traditional, or Jabali. She is also complimented for her modest style that maintains elegance and attractiveness without being sexualised, which was one of the main compliments for her Azab El Hawa music video.

Has an official SoundCloud

Diana Haddad and her music provide examples of: