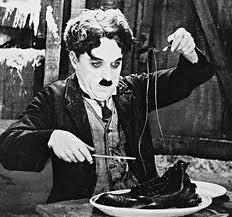 Do you want laces with that?
"There once was a man from Peru,
Who dreamed he was eating his shoe.
He woke with a fright
In the middle of the night,
To find that his dream had come true"
— Gary (in his dreams), SpongeBob SquarePants
Advertisement:

Out of all the unusual things that someone can eat, shoes tend to be the most popular choice in fiction. Probably because they are the type of clothing one misses the least - if male. Also, they tend to be made of leather (which resembles food the most out of anything else you'll ever wear).note Unless, of course you happen to be Lady Gaga. Then it's something else. Trope Maker is probably Charlie Chaplin, who did it first in his classic The Gold Rush (1925).

A subtrope of Poverty Food and Poverty for Comedy. Not to be confused with a Marshmallow Dream, in which a shoe may be eaten by accident (as shown in the Limerick above). Nor with It Tastes Like Feet; though shoes presumably do taste like feet, that trope is about actual food that's claimed to taste like feet or other non-food objects. When done as part of a bet, it's Clothes-Eating Wager.