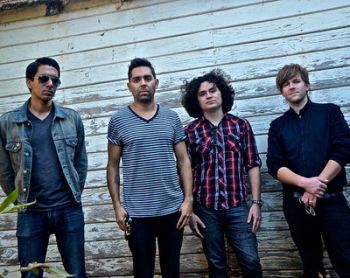 Saves the Day is a Pop Punk/Emo band from Princeton, New Jersey that formed in 1994. They original had the name Sefler (an inside joke made by frontman Chris Conley, meaning someone who likes to have sex with Santa Claus) until a bandmate convinced them to change their name. However, they did not release an album until 1998, called Can't Slow Down. The following year, they then released the album Through Being Cool, named after the Devo song of the same name. Both of these were reasonably successful. However, in 2001, they released their most critically acclaimed album, Stay What You Are. This album took a new route into the genre of Emo. Then, in 2003, they took another, musically Lighter and Softer, route with the release of In Reverie. This album mixed Grunge guitar, poppy synths, and a higher pitched, more effeminate voice, bringing forth memories of The Beatles. This album received generally poor reviews, however, has in recent years, gotten a cult following. Saves the Day then released a trio of albums, Sound the Alarm, Under the Boards, and finally Daybreak. These combined all their previous sounds to produce something similar, yet different. It tells tales of sorrow, self-discovery, and forgiveness. They have recently reentered the studio to produce their newest album.