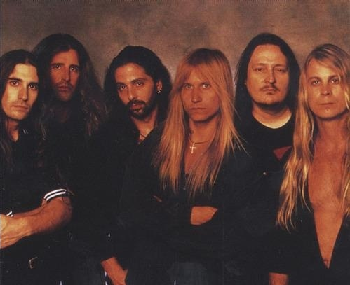 Savatage was a Progressive Metal band from Tarpon Springs, Florida. Originally named Avatar, the band was formed by Jon Oliva and his brother Criss, the name "Savatage" was born when they were forced to change Avatar's name and they combined it with "savage". Savatage was active between 1978 and 2001, released twelve albums and survived the 1993 death of Criss, before entering an indefinite hiatus. During the hiatus, the band was broken up so that Jon Oliva could focus on other projects; Trans-Siberian Orchestra as well as Jon Oliva's Pain.

They initially played typical Heavy Metal, reminiscent of Judas Priest or Iron Maiden, before being joined by producer Paul O'Neill in 1987. Afterwards, they switched to a more conceptual, symphonic style of music. They successfully combined elements of both formats on several albums, giving them a varied mix between metal and progressive rock. While they never became a mainstream success, they were appreciated by critics and developed a very loyal fan base.

Savatage reunited for a one off show in 2015, along with Trans-Siberian Orchestra on the same night, but the future of the band is unknown.

"Hall of the Mountain King" was featured on the soundtrack for Brütal Legend.