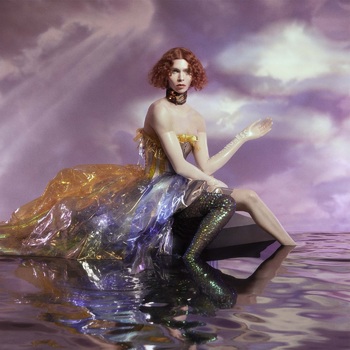 "I hope you don't take this the wrong way,
but I think the inside is your best side."
Advertisement:

Sophie Xeon (17 September 1986 - 30 January 2021), mononymously known as SOPHIE, was an enigmatic, idiosyncratic Scottish-born and Los Angeles-based electronic producer, known for being one of the Trope Makers of the "bubblegum bass" subgenre of electronic dance music.

Gaining critical attention and popularity since 2013-2014 with singles like "BIPP" and "LEMONADE", Sophie's music — and the wider bubblegum bass formula she helped solidify — took the conventions of pop music and wildly exaggerated them to Uncanny Valley-like levels, with cutesy, heavily synthesized and "plastic"-sounding instrumentals, pitched-up vocals with repetitive lyrics, and often frenzied, chaotic, but detailed beats. The result is music that's equal parts surreal, blatantly artificial, parodic, and ridiculously catchy.

Sophie released several singles throughout 2013 to 2015, which were all then released in a compilation in 2015, titled Product. Near the end of 2017, she emerged from secrecy and premiered her newest single "It's Okay to Cry". Later in the month, she made her debut live performance, released her next single, "Ponyboy", and announced her first major studio album, Oil of Every Pearl's Un-Insides, released in June 2018.

On top of her own singles, she shared her unique style with other artists, with many producer credits working with Madonna, Charli XCX, Lady Gaga, Cashmere Cat, Vince Staples, Namie Amuro, and others. She's also frequently associated with the London-based PC Music label, sharing a similar approach to electronic and pop music, and has frequently collaborated with founder A.G. Cook, as well as individual acts like GFOTY and Hannah Diamond.

Sophie died on January 30, 2021, as a result of an accidental fall in Athens, Greece.

My tropes are the front of shop:

Shake, shake, shake it up and make it fiiiiiiizz!