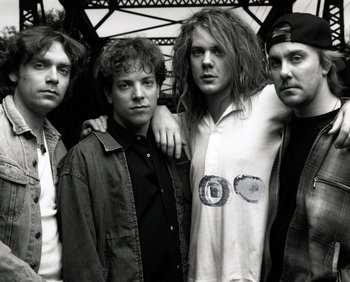 Runaway train, never goin' back,
Wrong way on a one-way track,
Seems like I should be getting somewhere,
Somehow I'm neither here nor there.
"Runaway Train"
Advertisement:

Soul Asylum is an American alternative rock band from Minneapolis led by singer/guitarist Dave Pirner that have been active since 1983. Best known for their 1993 song "Runaway Train" that featured pictures of missing persons (localised to the country the video was being shown in) interspersed with the video itself followed by a short Public Service Announcement by Pirner, as well as their 1995 hit "Misery." The band faded away from public conciousness as the 90s drew to a close but are still recording and touring.

Pirner and Winona Ryder dated for three years in the mid 1990s leading to Pirner starting a bizarre one sided feud with Primus after Pirner took violent exception to their song "Wynona's Big Brown Beaver" despite lead singer Les Claypool's adamant statement that the song was not about Ryder - if nothing else the title is spelled and pronounced differently to her name.

This band and their music contain examples of:

Advertisement:
-"You know what the problem with music videos is? They never address the interest of the common man... alls I saw was chaotic imagery and metaphoric visuals. No hockey, no comics, nothing; just chicks and explosions."