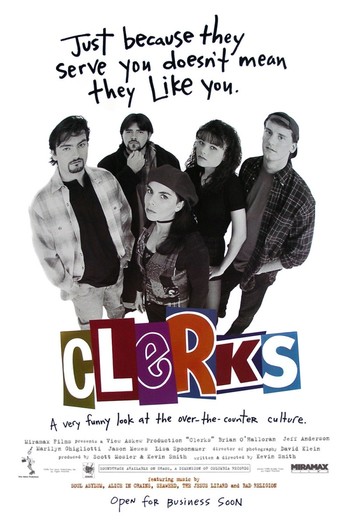 "That guy's an asshole. Everybody that comes in here is way too uptight. This job would be great if it wasn't for the fucking customers."
— Randal Graves
Advertisement:

The ultimate low-budget success story that turned Kevin Smith from a working-class kid from New Jersey to one of the most popular filmmaking personalities of all time.

Filmed in 1993 but not theatrically released until 1994, it cost $27,000 to make, roughly the same price as a new car at the time. The film's final cost was $230,000 after the rights to its grunge- and punk-oriented soundtrack were added in, making it one of the few films in history where the rights to the soundtrack actually cost more than the film.

Clerks was shot in the scenic QuickStop convenience store where Smith worked at the time and featured a cast made up of Smith's friends (such as Jeff Anderson, Walt Flanagan, Jason Mewes and Scott Mosier) and family (in various small roles), Smith himself, and a few local actors (such as Brian O'Halloran, who plays the lead role of Dante Hicks). When released, the film made its budget back several times over. Its success enabled Smith to make several more films with some of the same characters and settings.

Surprisingly for a film with a large amount of profanity and vulgar references, it manages to stay quite intelligent and upon release, it was well-received by critics such as Roger Ebert and Leonard Maltin. The film's success helped jump-start the modern independent film industry (which actually began with Stranger Than Paradise and She's Gotta Have It but was given a big kick by sex, lies, and videotape and Slacker, the latter of which Smith claimed was his direct inspiration for this film) and turned Miramax into a major distributor for said independent films, rivaled only by Polygram Filmed Entertainment and Fox Searchlight.

The film is about a day in the life of a pair of friends, Dante Hicks and Randal Graves, working at Quick Stop and RST Video, respectively. Another group of friends, Jay and Silent Bob, deal drugs and hang out around Quick Stop. Dante (as he will constantly remind you) isn't even supposed to be there that day - it's his day off, but he was forced to cover a coworker's morning shift.

Sometime later, Randal shows up for work. He spends most of his day at the Quick Stop rather than working, though. Dante's girlfriend, Veronica, comes over to talk to him. There he finds out that she has... had quite a lot of fun. It's yet another thing Dante obsesses over.

Later on, Dante closes up shop, because he had a hockey game to play that day. They play on the roof, but after an annoyed customer comes up, joins the game, and loses the puck, they have to stop and get back to work. They also go to a funeral, meet up with Dante's ex-girlfriend (who goes through some trauma), and get in a fight. In the end, they stop arguing and close up for the day.

The first part of The View Askewniverse (though Mallrats, which came out later, depicts the events of the day before the events of Clerks). With the obvious exception of Jay and Silent Bob, Dante and Randal are the most frequently recurring characters in the verse, having starred in an Animated Adaptation, Clerks: The Animated Series, several comics, and in 2006, a true sequel in Clerks II. A third film has been in the works since at least 2017; in 2021, it was announced that Clerks III had been picked up by Lionsgate, with a release set for September 2022.

An Animated Adaptation of a scene cut from the script before shooting began for budget reasons, explaining why Dante and Randal are chased out of the funeral parlor when they attend Julie Dwyer's wake. Animated in the style of Clerks: The Animated Series, it features O'Halloran and Anderson reprising their roles and Joey Lauren Adams in a cameo as her character Alyssa Jones from Chasing Amy.

Included in the tenth anniversary boxed set of Clerks.