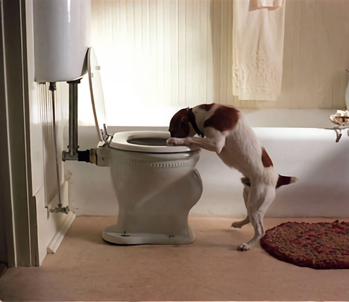 Many people keep dogs as pets. Most people have toilets. These are jokes about dogs drinking from toilets, which is a common gross-out joke about dogs.

This can be Truth in Television if the dog is tall enough to reach the bowl (though of course, not everyone will find it funny, and sometimes other animals, such as cats, do it too), and the reason is likely because the water gets oxygenated by flushing, is cooler than their bowl because of the porcelain, and dogs don't know (and probably wouldn't care if they did) what we use it for.

This is one of the stock "disobedient dog" behaviors, along with having accidents, jumping up, pulling, chasing cars/squirrels/cats/posties, chewing shoes, and scavenging/stealing food.

See Urine Trouble, Yellow Snow (do note that this can apply to other animals too) and (in the cases where they pee on them) Dogs Love Fire Hydrants for other stock toilet jokes involving dogs and Flushing-Edge Interactivity, Swirlie, Goodies in the Toilets, and Fun with Flushing for other jokes about toilets. If an animal who is not a dog drinks from the toilet, that's usually an example of All Animals Are Dogs (though some animals like cats sometimes do it too). And if the animal in question is a cat, that would avert Cats Hate Water aspect. Sub-trope of Stock Animal Behavior.

Prepare for a dog to deal with dirty sewer rats, when the plague comes.